The Harley Davidson of cameras… 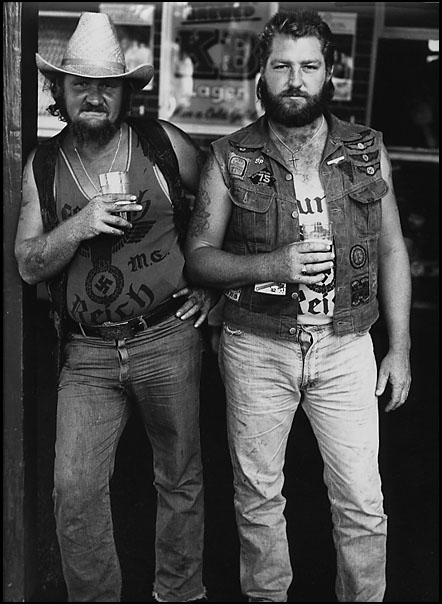 Long before digital photography was there to provide me with everyday excitement and enthusiasm, whenever my work became stale and predictable, I would try to introduce a change of pace, subject or format to freshen up my eye. Sometime in the early 80s, I suggested to my then assistant, Frank Lindner, that we take a trip to the annual Tamworth Country Music Festival, to see what it was about.

For change of format from my usual 35mm work, I borrowed a 5×4 Pacemaker Speed Graphic from my good friend and colleague, Simon Cowling, and with a couple of Grafmatic backs loaded with T-Max 400 set off on the 600 kilometre drive to Tamworth.

We arrived mid-morning and drove around the city looking for picture opportunities. We drove all over town looking at all these boring, cowboy-hatted, line-dancing types and country yodellers, but just couldn’t get excited about the subject. Now don’t get me wrong. I like country music. The real thing, American country music, that is. I just don’t enjoy the derivative Australian version that masquerades in pseudo-American accents as the voice of rural Australia. But that’s another story, and will probably get me a whole lot of rude comments from Slim Dusty or Lee Kernaghan fans. To me, Tamworth lacked authenticity, and I wasn’t in the mood to make pictures taking the piss out of imitation cowboys.

In cruising through town we had both taken a sideways glance at a particular noisy pub. The Locomotive Hotel had been adopted by biker gangs as their headquarters for the weekend and the noise of their rioting could be heard for several blocks. Neither of us said anything. But on our third pass, I said to Frank, “What do you reckon?” The answer he gave was probably not the one I wanted or needed. “I’m game if you are.” Now, we were committed by our egos, come what may.

Finding a parking spot nearby we tried to insinuate ourselves quietly amongst this rough and rowdy crowd. As we arrived they didn’t seem to take much notice of us, but they were too pre-occupied throwing beer cans at a singer on a makeshift stage on the back of a truck and also, as we were, distracted by biker women who were flashing their breasts. Frank and I tried to look as tough as we could. Anyone knowing Frank is probably laughing right now. I at least had the advantage of size, but in reality there was no disguising the fact that we were soft civilians. I also had that Speed Graphic hanging like a baby coffin from my left hand and in my mind it now took on the dimensions of the Polaroid 20×24 camera (and I’ve been lucky enough to shoot with that monster too, but that’s another story altogether). Discrete photography was never an attribute of the Pacemaker Graphic.

Frank and I separated to look for pictures. In less than ten minutes, he was back having been immediately robbed of his cash in the hotel. Luckily they let him keep his cameras.

Things were looking decidedly perilous. After about half an hour of trying to get up enough courage to take pictures, some burly bikers bailed me up, eyed the Speed Graphic and demanded, “What the fuck is that?” This was it, I thought. The moment when I’m kicked to the ground and stomped to death by a crowd of enraged bikers.

Seeking an appropriately conciliatory response, I felt a sudden surge of adrenaline. I briefly weighed up my chances of using that big camera as a weapon. I’d once seen one used to knock out a photographer, but that’s yet another story. I immediately thought the better of it. Suddenly, inspiration! Trying desperately to conceal the quaver in my voice, I said, “I guess you could call it the Harley Davidson of press cameras. It’s called a Speed Graphic”…a couple of beats while this information penetrated their beer and dope-soaked brains…”Shit mate, that’s cool. Take our photo!” they ordered.

I didn’t hesitate. Desperately struggling to hide the trembling of my hands while cranking away at the rangefinder I got away a couple of frames. They bought me a beer…

PS If you are old enough to remember using a Speed Graphic, please feel free to add your memories of this wonderful camera…