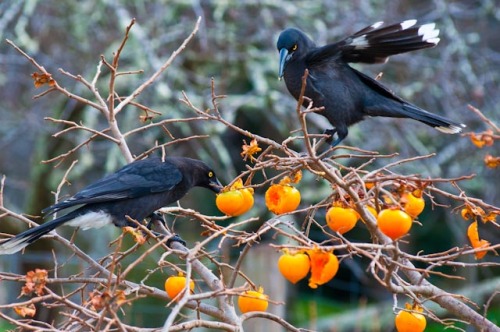 in my garden this morning…

For the bird watcher, these are Strepera fuliginosa. More can be read about these very clever birds here.

Melbourne…wear anything as long as its black…

This week The Economist voted Melbourne the world’s third most liveable city in the world, narrowly beaten by Vancouver and Vienna. The Melbourne newspapers have run hot with the news, mainly with the emphasis that the city beat Sydney, which  had to share ninth place with Zurich. As far as I can tell, the Melbourne/Sydney rivalry is only in the mind of Melbournites. Sydney, blessed with its magnificent harbour, draped with the arch of the Harbour Bridge and the Sydney Opera House,  doesn’t even have to try.

The blogs and newspaper commentaries have been running even hotter with commentary, for and against, mostly from Melbourne residents. Those against complain about the transport system; those for, seem to place a rather strange emphasis on the quality of Melbourne coffee. It’s as though they believe urban sophistication can be attributed to the quality of the bean roast and the skill of its baristas. Is this why Vienna beat them on the leader board?

One particular commentator, wrote this:

“I call Melbourne BLACK, BLAND MELBOURNE. Just walk into the city whether winter or summer and all you see is men and particularly women dressed in black. Go into a department store or any restaurant or any shop for that matter and every employee is wearing black. Boring and bland. Go to Paris and women wear all colours, hardly any funeral black. So Melbourne needs to brighten up.”

This prompted me to dive to my picture files. I was in Melbourne two weeks ago and took these picture. I love Melbourne, it’s a bright, colourful city, but that writer is right, there is a pre-occupation amongst its inhabitants to wear black. If only Melburnians would learn to relax…but it must be hard when you are continually being pumped with all that caffiene…

Through the prism of an over-active imagination…

London, 1967. I was hanging around a film location with a bunch of other press photographers. The film was being directed by Roman Polanski and we were waiting to photograph his wife, the actress, Sharon Tate. Suddenly a black kid, no more than 11 years of age, in short pants, with a runny nose, detached himself from a small crowd of spectators and came up to me. In a Cockney-tinged accent he asked, “Hey mister! You a photographer?” The two or three Nikons around my neck would have made this pretty obvious, but as soon as I confirmed it, the kid said, “My name is Dennis Morris. Wait there. I’ll be right back.” and scooted off through the crowd.

He was back a few minutes later with a fistful of black and white prints which he offered, stating it was his ambition to become a pro photographer. The pictures were much what you would have expected from an 11-year-old, but there was something about the boy; something about his spirit that moved me to offer encouragement. At the time, I was sharing a studio in the West End so I gave him my card and told him to drop in to have a look around and to pick up a pile of photo magazines that we no longer needed.

Over the next few years, Dennis became a regular visitor to the studio and each school holiday he would join us for work experience. As the cliche goes, he was as keen as mustard, and he began to show real talent. I took him with me on assignments when I could and also to the occasional parties that were part of the “swinging London” scene of the 60’s. His mother, a single parent, raised him and his brother in a single room in one of the poorer parts of London. I was a little anxious that introducing him to the vibrant social scene of late 60’s London might turn his head.

By 1971, I had been away from Australia for five years and decided it was time to go home. By this time Dennis had become a very cool and stylish sixteen year old. The last conversation we had was in a pub near my studio. Though under-age, he had no trouble passing as someone older. I remember, He was wearing a black Borsalino hat and a long black overcoat. He looked like he was auditioning for a part in Shaft. Over a couple of pints, he told me he was dropping out of high school and going on tour with a musician he had met while taking photos at a club in Oxford Street. The musician was some dreadlocked Jamaican unknown by the name of Bob Marley.

Back in Australia, I  went through a marriage break-up. The future didn’t look too bright. Freelancing in Australia as a photojournalist was unheard of. I quickly reinvented myself as a fashion photographer and this earned me a good living for a while, until eventually the marketplace caught up. As the newspapers began to establish colour supplements they also began to look around for photographers with illustrative experience. The sort of work I did was suddenly in demand. I was able to re-establish myself as an editorial and corporate shooter.

As the years went by, I shared, built and established several studios. From time-to-time I used to wonder what had become of Dennis. Underlying this wondering was an tinge of guilt. I felt somewhat responsible for him becoming a high school dropout. I assuaged this guilt by telling myself that there was a good chance he had done alright. Bob Marley had become a superstar and a many of his record covers carried Dennis’ picture credit. Maybe Dennis was OK.

Anyway, in 1990 I remarried, moved to Tasmania, had a couple of children, and led a bucolic settled existence. One cold winter Sunday afternoon, I idly flicked the TV to the ABC arts program and there was Dennis Morris being interviewed. He was in Australia as a guest of the Perth Arts Festival exhibiting his iconic photographs of the Sex Pistols.

I promptly Googled his name and was delighted to find that Dennis had not only got on OK, he had done very well indeed. He had published several books and his photography was being exhibited internationally. In addition to his photography, Dennis had also been lead singer with a punk/reggae fusion band, the Basement 5 that had gathered a powerful cult following, especially in Germany.

Getting onto the internet it didn’t take me long to find his website and an email address. I sent him a message. Almost immediately there was a phone call and a deep London inflected West Indian accent told me, “Rob, there’s no way I’m coming to Australia and not visiting you!” A few days later I was greeting him at Hobart airport, with his beautiful French wife Isabel, and his lovely daughter Pearl, who was about the same age as my daughter, Cassie.

The next ten days were a blur as we filled in the thirty-five year gap in our friendship. Over dinner one night with our families at the home of a composer friend, Dennis told me that back in London the day we first met, he had looked along the line of photographers, to make up his mind who seemed to be the most approachable, and of all the photographers there had settled on me. I was flattered, but then he said, “You know back in the 60’s, you were so damned cool. I wanted to be you!”. At that, I couldn’t help turning to my teenage son to say, “You hear that, Kim? Once upon a time,  your dad was really cool”. To Dennis I said, “You know back in the 60s, all I wanted to be was black and West Indian…now that was cool.”

At one point during his visit, Dennis asked, “You remember that room, I lived in wiv’ my Mum in London? You know she still lives there.” I was amazed. I was even more surprised when he told me with a broad smile, “Yep! I bought her the house!”.

Today, old, grey-haired and overweight. I’d like to think that my children might detect a remnant of lingering cool about me…but I doubt it. Dennis, on the other hand, is still black, still West Indian and still very, very cool. For me, the payoff in reconnecting was that I no longer carried the baggage; the stupidly misplaced idea; that I might have been a bad influence on his life.

For anyone interested in knowing more about Dennis Morris, here is a recent interview with Mr Cool himself. Dennis Morris, is a man I am proud to have known and who long ago, I like to believe, I might have influenced in some small way. All power to you Dennis. I guess I can stop beating myself up, eh?
: