Now this isn’t about photography, though I guess it was driven by a nostalgia for the great picture magazines of the 1960s. Leafing through a 50-year-old copy of Look magazine (May 22, 1962) this morning, I became absorbed in a pictorial essay about Lenin, “The true story of the evil genius who launched the global Red threat”; then I put off the photo-editing chore that I had schedule by getting stuck in an op-ed piece by Senator Hubert Humphrey, “Big Business; Is it Too Big?”, and then procrastinated further with an article about a “secret” cure for arthritis (what happened to that secret cure?).

From the perspective of 2011, the cold-war dominated take on communism was fascinating; in hindsight Humphrey’s take on big business being the engine room of a healthy democracy (well, he would say that, wouldn’t he?) seems merely wishful thinking, in the aftermath of the recent financial crisis…and the one still looming.

But to me, the most absorbing aspect of this time-machine was the Madison Avenue, Mad Men style advertising of the day. The 1962 model Valiant marketed with a headline that reads, “Valiant-owned and operated by 364,000 independent Americans”. Motown magic! “Enjoy Life with Miller High Life; same good taste everywhere because it’s brewed only in Milwaukee…naturally“. Campbell’s Soups, “Why our soups look as good as they taste. They’re color-planned all the way from seed to simmer”>

However, the copy line of one ad just grabbed me by the throat for its lyrical quality. I must confess, this line has stuck in my head, ever since I bought the magazine in the St Vincent de Paul op shop in North Hobart, a year or two ago. I guess this is what good copywriting should do. But one has to wonder whether it resonates because of a filter of fifty years. 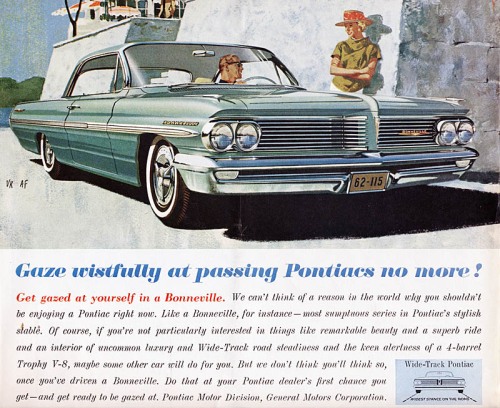 Has copywriting ever aspired to such poetry? Who wrote this? An enthusiast of haiku? Did it sell Pontiacs? Did its author stick to his craft? Or move on to write the Great American Novel? Was he a she? So many questions…while I

Now I reckon that’s powerful good copy And beautiful too!

In 1969 I had been working on Fleet Street for almost three years, mostly for (United Press International). UPI had offices in a narrow building at 8 Bouverie Street, immediately opposite the News of The World. One Saturday afternoon after filing pictures from an assignment, I was leaving the office, when I saw a flash car, double-parked in the narrow street. At the wheel, was Anna Murdoch. I knew Anna from our time working together on The Australian in Canberra in 1966 when she was still Anna Torv, and as the gossip went, Rupert’s mistress.

I stopped to say, hello. When down the steps of the NoW strolled Rupert, tucking the very first edition of his new acquisition (and perhaps here I could be excused for using the cliché, hot off the press) under his arm. Anna said to him, “You remember Rob, don’t you, Rupert?” We shook hands. He said, “Yes, I do..you’ve changed your beard or something, haven’t you?” Actually, I had been clean-shaven when I worked for him in Canberra. Knowing his reputed visceral hatred of facial hair and ever the smart-arse I replied, “Yes…actually, I’ve grown one.”

Though I was carrying a loaded Nikon, I was just not clever enough to think to take a picture of him. I imagine a shot of Rupert with his very first copy of The News of the World  might have been a very good seller this week…